Premier Pool Service Can Install or Repair Your Pool Pump

While often underrated, a pool pump is the most important part of your swimming pool. It can labor to keep the pool circulating, pulling water from the skimmer & main drain, then pushing water into the filter and through the heater (and up to the roof if you have solar) and finally sending it back through the pool returns to circulate chemicals, keeping the water safe to swim in. The pump essentially runs the pool, so when your pool pump is running ineffectively or not at all, it can take your pool from relaxing to stressful. Not only can an inefficient or failed pool pump keep you out of the pool, it can cost you money. Premier Pool Service specializes in Variable Speed Pool Pump Installation and Repair. If you are looking to replace a faulty piece of pool equipment or repair an existing unit - give us a call for a free estimate or fill out an online form.

Why Upgrade To A Variable Speed Pump? 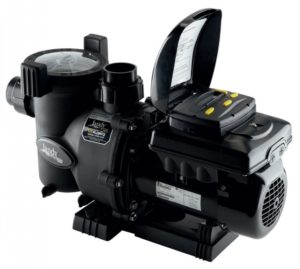 Single speed pumps are your traditional pool pump and have been in use for decades. Once turned on, it runs at a constant speed. These are the least expensive to purchase, however they are extremely noisy and inefficient. It has been said that a single speed pool pump is the most expensive appliance in most homes....costing up to $2,000 per year to operate in some areas.

A Two-Speed pump is a variation of the single speed pump, in that they both use what's known as an induction style motor. The difference is that a two-speed pump has a low speed option, which is far more efficient than running the pump on high speed all the time. On average, a two-speed pump will save about 50%-70% on energy cost compared to a one-speed pump.

Unlike the inefficient induction motors used in single and two-speed pumps, variable speed pump utilize what's known as a permanent magnet motor. This is the same type of motor used in electric cars. They allow the user to "dial in" the exact flow rate they need for their pool. Reducing the flow rate of water and friction, which makes the entire system dramatically more efficient. They are also much quieter, vibrate less, run cooler, last longer, are digitally controlled, and have advanced diagnostics. Basically, variable speed pumps your higher end pool pumps, and most studies show that they are 90% more efficient than standard one-speed pumps. This typically equates to an operating cost of approximately $20-$30 per month.

Get a FREE Quote Now!